Sister Ana Rosa will translate for the Pope on his trip but says she wishes her cousin had time to visit the “real Thailand”. 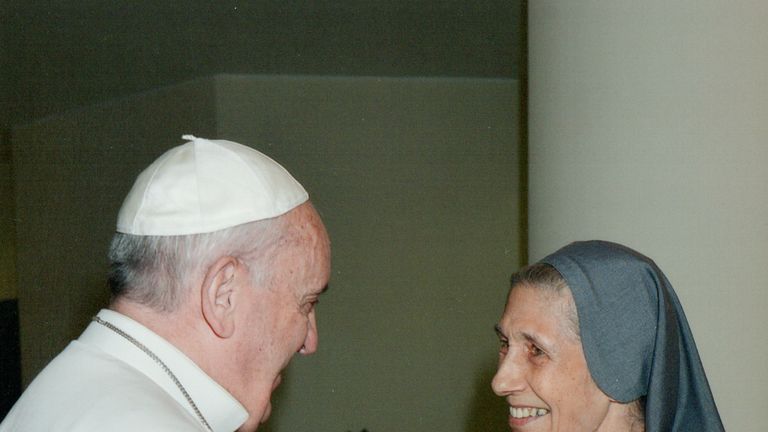 The Pope in his childhood was ‘maybe mischievous, but only in the way that all boys are’

Pope Francis is making his first trip to Thailand this week – only the second papal visit to the mainly Buddhist country.

Among those greeting him is a 77-year-old nun who’s been living in Thailand for 54 years.

But Sister Ana Rosa Sivori isn’t just a missionary, she’s the Pope’s second cousin. They both grew up in Buenos Aires and had the same great-grandfather.

She spoke to Sky News about her famous relative.

We are a big family and we’d all get together for feasts, for celebrations.

Pope Francis is six years older than me, so by the time I was born he was already a boy. We were a middle-class Catholic family. Of course, we were all involved with the church and we’d see each other there.

He was more or less a quiet child. He wasn’t very talkative as a boy. He just said what he needed to say. He had a normal life with normal friends.

He was maybe mischievous, but only in the way that all boys are, a normal teenager.

He spoke about the day he got the inspiration to be a priest: He was out with his friends and went for confession in a church.

That was when he realised who he was and started to think about becoming a priest. So from that moment, it was the life he followed.

He was a good student and now is a very intellectual man. He likes to read and has written many books. When he talks to important people you can feel how intellectual he is.

When he was 75, he thought he had finished his work.

Then Pope Benedict resigned and he was called to Rome for the conclave to elect the new Pope.

He thought he’d only be gone from Argentina for a few days. He thought he would come back and continue his work as a Cardinal until the new Pope said he could retire.

I saw him in March last year. The last two times I’ve been home to Argentina from Thailand I’ve stopped at The Vatican to see him.

He’s my cousin, but he’s also the Pope. We talk about the things that all relatives do when they meet.

I talk to him in the way I talk to my family, like when I chat with my brother and sister.

I don’t call him His Holiness, I call him Jorge.

When we see each other In Thailand (where she will translate for him) I’ll say: ‘Hola Jorge. Como estas? Que lindo que estas aqui en Tailandia!’ (Hi Jorge. How are you? It’s so nice that you’re in Thailand).

We write to each other two or three times a year.

He doesn’t use email or text, so I write to him via the Vatican embassy. I address him as ‘Dear Jorge’ but then in brackets, ‘Pope Francis’. If I need to get in touch with him urgently then I email his secretary.

I think people here in Thailand want to hear good thoughts from the Pope, thoughts that will help them with their lives.

They are excited to see him, to listen to him. They are also curious. I don’t know why he decided to visit Thailand, I believe it’s God’s inspiration.

I feel sad that he won’t get to see the real Thailand.

He’s going to see a lot of grand buildings in Bangkok, a lot of luxury. It would be nice if he could look around more and get a different view.

I wish that he could go the provinces in the north to see the tribes in the hills. There are so many poor people.

Even in Bangkok there are a lot of poor people. That’s who he is working for. Nobody talks about the poor. But he’s doing whatever he can for them.

He is a Pope for this era, for this time. The whole world is upside down. I see his sorrow when he talks about Syria, Africa and Chile where they are killing each other.

He wants everyone to pardon each other and live in peace. He’s working for peace, promoting friendship. He wants to build bridges to join people.