Thirty judges, court registrars, researchers and inspectors of the High Court-Chamber of International Crimes and the Court of Appeal completed a two-day training on International Humanitarian Law (IHL). 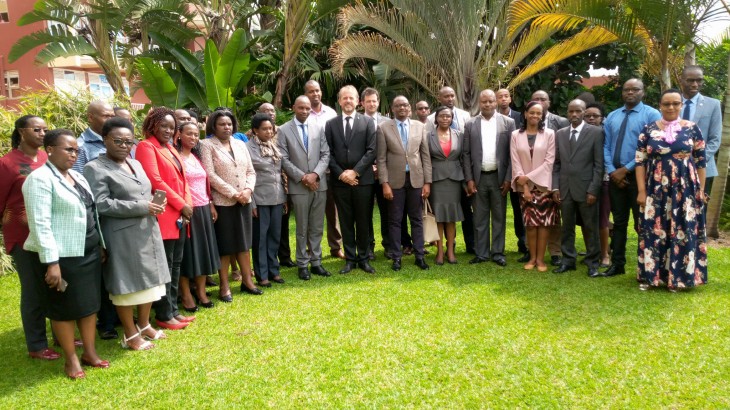 Judges, court registrars, researchers and inspectors of the High Court-Chamber of International Crimes and the Court of Appeal pose for a picture during the training. The ICRC, acting in accordance with its mandate as the guardian of IHL, promotes IHL in Rwanda and throughout the world.

The two-day training aimed to promote the exchange of knowledge and experiences on IHL among individuals involved in the interpretation and application of the law in Rwanda.

The participants at the training learnt how IHL principles are applied in criminal case law. On the last day Richard Muhumuza, a judge of the Court of Appeal personally commended the training, saying that it had broadened and strengthened the participants’ knowledge of IHL and will help in the adjudication of war crime cases.

Under common article 1 of the Geneva Conventions, States are obliged to respect the rules of IHL. They must prevent, repress and suppress violations of the law. Judges and Court registrars play a key role by adjudicating alleged perpetrators of serious, criminalized violations.

Twenty-five years after the 1994 genocide that claimed more than one million victims, the country has committed to building a professional, well-resourced judiciary, explained the President of the Court of Appeal, Aimé Muyoboke Kalimunda while officiating the training.

Appreciating the course, Kalimunda said, “This training falls within the Rwandan vision of a judiciary that encompasses three qualities: effectiveness, efficiency and professionalism.”

François Moreillon, the Head of ICRC Delegation in Rwanda, commended the work of the Rwandan Judiciary in strengthening the rule of law and, through the International Crimes Division of the High Court of Rwanda, implementing IHL.

He further added that the ICRC, acting in accordance with its mandate as the guardian of IHL, promotes IHL in Rwanda and throughout the world. It engages judicial authorities, who are at the forefront of IHL implementation, on contemporary legal issues.

The ICRC has been working with different institutions in Rwanda, including the judiciary, Rwanda Defense Force, Rwanda Law Reform Commission and academia to promote awareness and knowledge of IHL.

According to the recent study commissioned by Rwanda Law Reform Commission with the support of ICRC Kigali Delegation, Rwanda is a party to 17 IHL-related international instruments, including the four Geneva Conventions of 1949 and their Additional Protocols of 1977.