Arsene Wenger has spoken about the prospect of Arsenal challenging for the Premier League title. 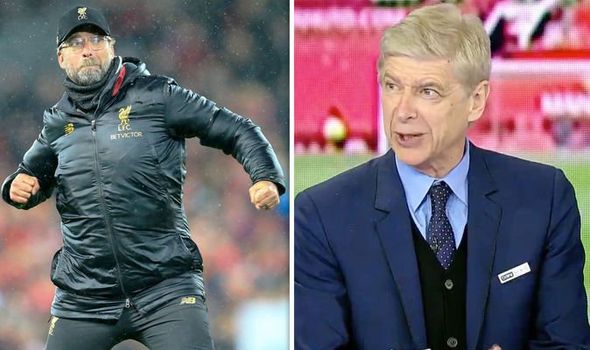 Liverpool are “too much in front” of the pack in the Premier League, and therefore it is unrealistic to think about Arsenal challenging for the title.

Liverpool are currently top of the Premier League after a blistering start, having won all eight of their matches.

They left it late on Saturday, as a James Milner penalty in the 95th minute earned them a 2-1 win over Leicester City.

After Manchester City’s shock defeat to Wolves on Sunday, the Reds now hold an eight-point lead over the champions.

And Wenger believes Jurgen Klopp’s side are currently too far ahead of the rest to start discussing a title race.

“I think there’s a pack of clubs that are very close to each other and there is one team above everybody else and that is Liverpool,” he said.

“It would not be realistic today to speak about that [Arsenal challenging for the title].

“I’m not the greatest at predictions, but right now you want to win games one after the other and see where you can be.

“But at the moment Liverpool are too much in front of everybody and they haven’t lost a game.”

Arsenal have had a mixed start to the season, and currently sit third in the league.

Their defensive mistakes have meant they have conceded more goals than anyone else in the top four, but have still lost just once this season. They are still just one point behind Manchester City, who are in second spot.

Unai Emery’s side has impressed in Europe, too, with back-to-back wins in the Europa League over Standard Liege.

And Wenger gave his support to Emery, who has found himself coming under criticism for his defensive management.

“I’m not here to judge coaches. I am a supporter of Arsenal Football Club, so I just support him,” Wenger continued.

“But he can win games and he plays a type of game that I like.

“A club like Arsenal is a huge responsibility and one of those responsibilities is to play attractive football. After that, I think the most important thing is to support the team and to win games.”